My kind of recruiter

I don't know much about Maryland coach Gary Williams except that they won the national championship while he was there, and he also stacked up seven Sweet 16s there and at Boston College.

I did not follow his teams while he was coaching and there are aspects of his story that I do not like, but I did like his approach to recruiting. He went almost exclusively after less-heralded players and developing them. Dave Odom, former South Carolina coach, said of him that he "has made a living off of the player who is maybe one or two tools short of the complete package (say, height or leaping ability), but who competes hard and plays with a chip on his shoulder" (think Rashad Jones-Jennings). He refused to associate closely with the local AAU coaches because of their questionable reputations.
Posted by MICHAELSPAPPY at 5:43 AM No comments:

When the Explorers sailed the College Seas

The Atlantic 10 is the eighth-ranked conference, which puts them in some good company, but outside the list of heavyweights. And La Salle was ranked 9th in the 14-team A-10. All of which means that the Explorers are not exactly on everyone's watch list of teams that ought to achieve great things these days.

However, just before Mr. Russell and San Fransisco took the college basketball world by storm, there was Tom Gola and La Salle. As a freshman, he led the Explorers to the 1952 NIT championship. Then they won the NCAA in 1954 and were runners-up in 1955. They made it to the Sweet 16 in 2013.

How did La Salle do it? Well, largely on Gola's capable shoulders. He averaged 20.0 ppg and 19 rpg over his four-year career, and is the all-time leading career rebounder in NCAA history, with 2201 boards.
Posted by MICHAELSPAPPY at 5:30 AM No comments:

Most basketball fans have heard of Pete Maravich, but many have forgotten that Niagara's Calvin Murphy was just a step behind Pistol Pete in scoring during that period. And what they are even less likely to know is that Murphy was a championship baton twirler. 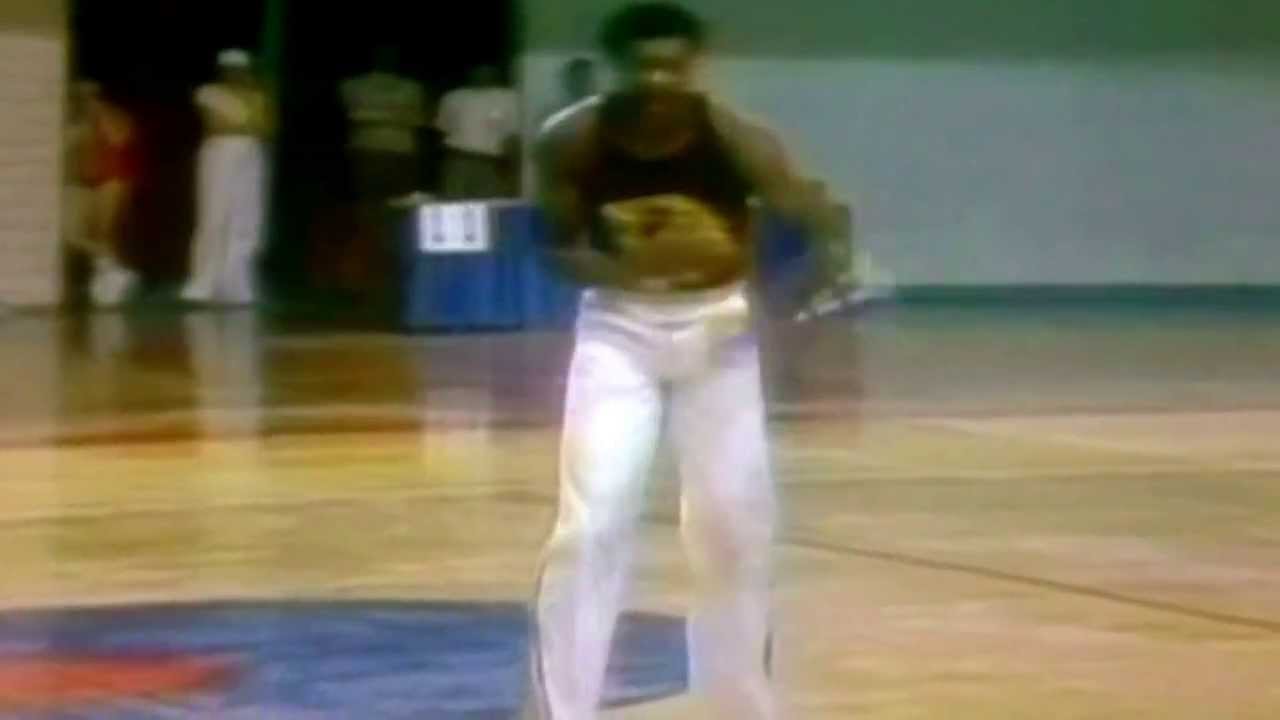 Posted by MICHAELSPAPPY at 5:16 AM No comments:

The War Between the States understandably made law enforcement an iffy thing, and thus criminal elements posing as quasi-militia groups (e.g., the James-Younger Gang) were almost impossible to control for a while.

Making college coaches obey the recruiting rules is seemingly impossible, since most fans don't care what they do as long as they win. With the confused environment brought on by the Covid virus, things should be even worse this off-season. Who knows what will emerge when the dust clears - if it ever does.
Posted by MICHAELSPAPPY at 5:27 AM No comments:

Quite a few fan sections, especially student rooting sections, have nicknames, e.g. Texas A&M's Twelfth Man. I have never seen one called Scarlet Fever (for a team with red as a color), but I think it would be a good one.
Posted by MICHAELSPAPPY at 5:07 AM No comments:

My father was at LSU working on his Master's Degree during the time when Bob Pettit was a three-time All-American there. He was the first Tiger in any sport to have his number retired. He went on to be a two-time MVP in the NBA. It must have been a lot of fun to see him play.

Posted by MICHAELSPAPPY at 5:06 AM No comments:

Dartmouth's day in the sun

Except for sometimes Penn and Harvard and Princeton, the Ivy League is not very good these days. And it has not been for a long time. After all, the academic standards are pretty high. And Dartmouth had not made it to any sort of post season since 1959, until they lost to Canisius in the CIT in 2015. A half century is a LONG dry spell.

But believe it or not, there was a time when the Big Green were a powerhouse in basketball. They lost NCAA championship finals games in 1942 and 1944 to Stanford and Utah, respectively. And two other times they went to the Elite Eight in the 1940s. Plus, WAY back before any of the tournaments, the Helms Foundation named a national champion, and in 1906 they picked - you guessed it, the Dartmouth Big Green. Perhaps there were extenuating circumstances: after all, in those days there was a slight international conflict sucking the basketball talent into foreign lands.

But they did it. The sports writers were talking about them, and no doubt they had a swagger about them. Dartmouth old-timers can say, "I remember when" (if there are any of them still alive).
Posted by MICHAELSPAPPY at 4:45 AM No comments:

William Theodore Walton III averaged 20.3 ppg, 15.7 rpg, and shot 65% from the field, so picking out a "best" game in a sterling career like that is making a stretch. (Those of you dreamers who think Michael Jordan was the best college player can forget it.) However, it would be hard to see anyone playing a better game than the one Walton played against Memphis State in the 1973 NCAA Finals.

In only 33 minutes ("only" because how could he get those numbers in 33 minutes?), he hit 21 out of 22 shots from the field, pulled down 13 rebounds, and had 2 assists and a block for good measure. And with 6-9 Larry Kenon getting 20 points and 8 rebounds for Memphis, it is not as though there was no talent on the opposing team. I actually watched that game live, and I was not a UCLA fan back then, so I did not appreciate what I was watching until years later when I looked at the statistics. I got to see live one of the most amazing performances in college basketball history.

And, for the record, no, even Bill Walton was not the best college player of all time. That award clearly goes to Kareem.
Posted by MICHAELSPAPPY at 5:31 AM No comments:

We might sometimes get into a discussion of what it takes to constitute a "big man" in a college line-up. However, there is no argument about the Biggest Man. Suleiman Ali Nashnush. At his peak, he was 8' 1/2" tall, although he was "only" 7-10 when he played professional basketball. He was born in 1943 and died in 1991. He was from Libya. Posted by MICHAELSPAPPY at 5:18 AM No comments:

Hey, I like new Wake Forest HC Steve Forbes. Wake center Olivier Sarr has put his name in the transfer portal. UK is supposed to be one of the teams after him. So Forbes says to Sarr, "Why would you want to go to Wake for three years and graduate from a place like Kentucky?"

Zowweee! This guy has some zing about him. I like it!
Posted by MICHAELSPAPPY at 4:49 AM No comments:

Pioneers are still at it

Denver was a national power in ice hockey when their basketball program was in the SBC, and they still are. I do not remember when they left the SBC, but they won another national championship in 2017 (their 8th). Plus they went to the Frozen Four in 2016 and 2019. By any measuring stick they are a national power in the sport. And we knew them when.
Posted by MICHAELSPAPPY at 5:00 AM No comments:

Because it has been a while since DePaul has been relevant, and perhaps because they do not have any national championships to their credit, I fear that Ray Meyer tends to be underrated in the minds of fans in the list of greatest coaches. But after all, his teams won 724 games, and DePaul was the NIT champion back in the days when that meant something (1945).

There are some unique features of Meyer's career. First, he never was a head coach anywhere but at DePaul. Second, he is one of a very few coaches to take a team to the Final Four in his first season as a head coach.

Third, Meyer may have the longest time between Final Fours of any head coach. DePaul went in that first season (1943), and then also in 1979. Thirty-six years is a long stretch to maintain that level of excellence.

Of course, DePaul had some low spots during Meyer's long tenure. From 1967 through 1975 they did not go to any kind of postseason. On the other hand, on top of those Final Fours, they had twelve 20-win seasons.

Meyer finished his career with a run of seven seasons of at least 21 wins, and all but one of them were at least 26 wins. From 1980 through 1982, he had three straight seasons in which he lost only two games.
Posted by MICHAELSPAPPY at 4:46 AM No comments:

Late in the game, when free throw shooting is at a premium, a lot of teams are in trouble because they don't have enough players who are good FT shooters. We ought not to have that problem, although we might have to play smallball a little bit to get there. Here are our best FT shooters:

That is a pretty solid group, even if there are not true bigs. And Johnson and Coupet are our #2 and #3 rebounders, respectively.
Posted by MICHAELSPAPPY at 5:08 AM No comments:

No one goes to the national finals with just one player, so we know that Indiana State had a good team in 1979 - more than just Larry Bird - even if they were not from a power conference. Bird did have a double/double, but there were two other players who scored in double figures.

And even though that was their only run as far as the Sweet 16 at the D1 level, they did have considerable success at lower levels.

The Sycamores were the NAIA national champs in 1950, and the runner-up on two other occasions, plus the D2 runner-up in 1968. And they went to the NAIA Final Four on three other occasions. So, Indiana State was accustomed to the bright lights of post-season, although it had been a while when the Bird Man led them to within a few points of a national championship in 1979.
Posted by MICHAELSPAPPY at 5:53 AM No comments:

Enjoy it, fans, because the double pair of big men that Little Rock should have working this coming season is very rare at our level. This past season (what there was of it), Ruot Monyyong just missed averaging a double/double, plus shooting 56.9% and blocking 62 shots. Kamani Johnson averaged 11 points and 6 rebounds per game, and led the team with 94 offensive boards.

BUT year before last, we also had a tremendous pair of big men. It is just that it was a different pair. Nikola Maric averaged 10.7 points and 4.5 rebounds, plus he shot 42.9% from the arc. While he was doing that, Kris Bankston was setting a school record with an unbelievable 81.3% from the field, 8.2 ppg, 4.5 rpg, and 34 blocks for good measure.

The good news? all four of them should be available this coming season.

Assuming all four stay healthy and play somewhere near their capabilities, what this means is that we have two pairs of big men to throw into the fray without having a significant letdown in performance. So the big guys can go as hard as they can go, all the time, and we have TWENTY big man fouls to give. And, of course, that is not even counting Admir Besovic, the biggest of them all, who gave us some quality minutes early last season.

Get ready, Little Rock. This town has never seen a stable of big men like this. Probably the Sun Belt has never seen it.
Posted by MICHAELSPAPPY at 4:48 AM No comments: