Chastity Reed may have been the best player in the conference before she left Little Rock. And if I remember correctly, her little mid-range jump shot was devastating - almost unstoppable. She was agile enough to get into the lane, and then she would pull up and knock down the shot. Over and over again. She spent most of her time facing the basket, and did her best work at about ten feet out - again, working on memory here.

Her senior year Chastity attempted only 29 three-pointers, and made only nine of those, so she was not a great shooter from outside. But she had more than twice as many FGs as anyone else on the team. And, in the process she was only third on the team in FTs attempted, so she was not going to the rim and getting fouled a ton of times or crashing the boards for offensive rebounds, because she had only 9 of those. Just that little deadly mid-range jumper.

I wonder why no one tries that these days. It was a good enough strategy to let Reed average 19.6 points per game. 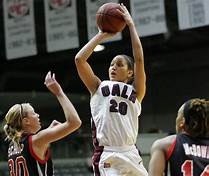 Posted by MICHAELSPAPPY at 6:23 AM